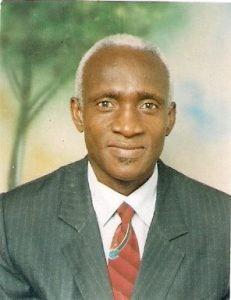 He was the Deputy Director at NAERLS  and  the coordinator of  all externally funded projects from October 2012 to October 2016 and  also a Board member of the School of Post Graduate Studies of the University from January 2013 to June 2016.

He was the Team leader/ Back stopping scientist to  the Strategic Agricultural Research  for Strategic Crop (SARD-SC) Maize of the Kaduna and Nassarawa States Innovation Platform funded by the African Development Bank and coordinated by IITA and currently a team member of the Harnessing Opportunities for Productivities Enhancement (HOPE) of Sorghum and millet in SSA Project in Nigeria  and The Accelerated Varietal Improvement and Seed Delivery of Legumes and Cereals in Africa (AVISA) project  being coordinated by ICRISAT and funded by Bill and Melinda Gate Foundation.

Additional, he was the NAERLS  Zonal Liaison Officer/ Officer in Charge of the North Central zonal office at Badeggi , covering Niger, Kogi, Kwara, Plateau, Nassarawa, Benue, Taraba States including the Federal Capital Territory, Abuja from  December 1990 to 2008 during which he  was the Secretary to the  North Central (Middle Belt)  Research Extension, Farmers Input Linkage System (REFILS) in Nigeria.

He was a National  Consultant to The Technical Centre for Agricultural and Rural Cooperation (CTA), The Netherlands  and Niger State Niger State Fadama  II .

He is a  life member of Agricultural Extension Society of Nigeria (AESON)  and Rural Sociological Association of Nigeria (RuSAN) and  was the Vice President (North) of AESON for four years. He was also the Nigerian Forum for Agricultural Advisory Services (NIFAAS) before his recent appointment as the Acting President/Country Focal Person of NIFAAS  with effect from  20th April 2020 after the appointment  of  the former  Country Focal Person (CFP)/President, Professor TJ Arokoyo was  into the AFAAS Board as Directors.

He has been very much involved in the training and  monitoring of field extension facilitators and lead farmers for the past four  decades.